A mug learns to swim

I’ve been learning swimming from Susan for a year and a half, had daily yoga practice for the past thirty-one years, or around 35,ooo hours, taught and lectured yoga for fifteen years, with twelve years of tai chi practice.  For the last five years I  have been developing a method to help us learn the fundamental connections which inspire and feed all movement.

I could never move very well on land.

Please, indulge me and let me qualify that statement: as a child and all the way into early adulthood I had been pretty uncoordinated; catching objects, hitting balls with bats or racquets and kicking, yes especially kicking a ball was so comical that when it came to PE, when the curriculum dictated football or tennis, I would be sent on a run or to the gym.  Granted they were different times back then, but this is just an example of how, even though I truly love to be active and feel the joy of movement, I couldn’t find a place to express the innate joy of being alive.  For instance, I would love running around a football or rugby pitch, even though I couldn’t actually do anything if and when I came in possession of the ball.  So, in short, I would expend a great deal of time and energy without actually ever reaping any rewards from within these chosen games and disciplines.

Now on land, this doesn’t really matter that much, but when you enter the medium of water, this goes from being fun to farcical.  Picture the average swimmer, expending a huge amount of energy in the water, intently trying to propel themselves forwards.  This was me.  Now take into consideration that whilst on land, the feeling of ‘giving it your all’ is applauded and in many cases a great result in and of itself.  However, in water, the best case can be that you do a lap of the pool and reach the side breathing heavily under the impression you’ve done something good; or worse case is watching someone, actually a vision of my father comes to mind, someone, desperately expending energy trying their best not to drown…he’s never learned to swim.

At school I didn’t learn how to catch or kick a ball, nor swing racquets, because as I later found out, my co-ordination wasn’t wired that well at birth.  So over these years I have taught myself through yoga and tai chi to connect a little better through the vessel of this body and out into the world.

This is where Susan and swimming come in.  When I first met Susan, I had over thirty years of yoga under my mat, so I felt I could now move quite well on land and had a pretty good idea of how moving can be fun, without expending a lot of excess energy.  Yet, when we got into the water I felt once again on that vast football pitch, frantically running after a ball, which in all honesty I was probably more  afraid of getting under my feet, as I would as much fall over it as kick it in the wrong direction.  So too, trying to co-ordinate my limbs whilst learning how to float, let alone breathe and don’t even mention propulsion.  How do you catch something which, when on land, falls out of your hands?  After all, we need mugs to hold our tea!

So the process began of learning how my body becomes the aforementioned mug, something which can ‘hold’ the water.  I was taught how to ‘skate’ and not sink, flick  the leg not flounder and flap, thread the arm through the water, not thrash.

Gradually, with time spent immersed in the new medium, I learn how one small action in my hips can ripple
through my body.  Similar I imagine to the subtle change in the placement of your foot on a ball can determine what direction you’d kick it in.  Yet, whilst kicking a ball hard will definitely result in the ball going faster, water is a different medium altogether.

The more I try and effort in this medium, the more this parallel of playing football comes to mind, where I am running after a ball and not knowing what to do with it. Here, the more I ‘work’ to get through the water, the more I find the water slows me down.

Football is known as the ‘beautiful game’, for when a team flows as a team, wonders are seen.  This said, there is a certain joy and happiness which comes when you and the team connect, you’re in flow together.  But here I need to get the team of my spine and four limbs working like five-a-side, because the whole of me is in contact with the water, or  to use the football analogy, I am the toes in my boot making contact with the ball.  I want my team to flow as a team, to connect to the water as a team connects to each other and the pitch, so I learn to catch the water and pass as effortlessly as possible through it.

This means I  must learn how to swim in a wholistic manner, discovering how I, as a whole, relate to this medium.  It is not enough to simply tell one limb to do this as another does that, for that is like a bunch of amateur football players running after the ball at once.  The problem is, that this is not easy. because I tend to carry with me habits and thoughts which interfere with my ability to connect.  In fact, learning how to swim in this way has put me against many uncomfortable aspects of myself, only one of which includes the innate fear of drowning.

But what if you, like me, decide to take this route?  To learn how to connect to the water and swim like a fish, how to learn to flow and float?  All I can say is that the pay off is a sense of freedom found in no other medium, no other place.  A freedom, which personally I have been looking for all my life.  Having found it on a mat and in movement, in watching the beautiful game of life unfold and I now want to continue to find it in the pool.

Which is why this mug continues to be fascinated in the process of learning how to swim. 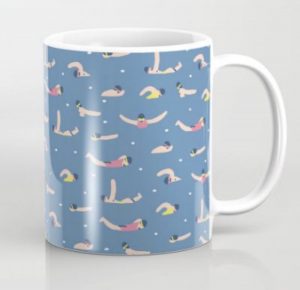